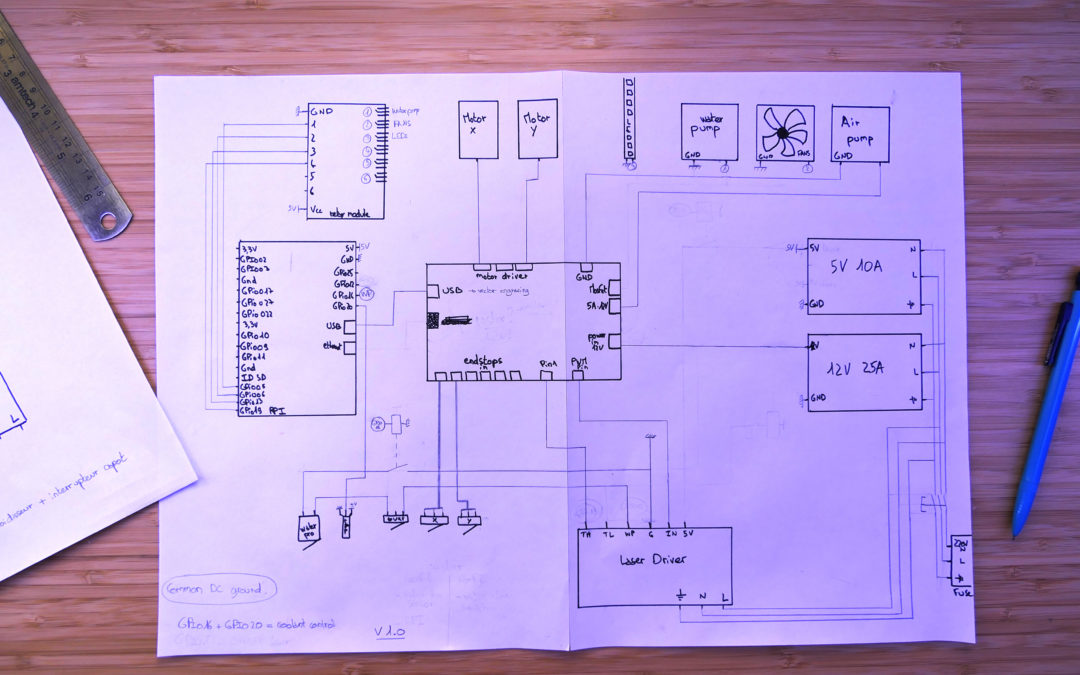 This article will highlight the different elements, explain what their purpose is and how I integrate them in this project. You will have access to the technical documentation and diagrams at the end.

It’s literally the brain of the machine and it has to be reliable and accurate. Arduino works, but GRBL does not allow a meaningful interpretation of the GCODE and the overall performance of the machine (acceleration, accuracy) is not very good. Not to mention that the driving part of the motor is delegated and becomes a big black box (proprietary components and low quality). The research I made led me to choose SmoothieBoard. I contacted RobotSeed, I explained the project and they offered me to perform my tests on a 3X 1.0 which contains 3 engine drivers and 2 MOSFET low intensity (5A / 24V max).

I took you the best picture I could for you to see the details, connectors and other things.

Elements to be considered

This board has been designed to support laser cutting from A to Z, so it interfaces much more finely with the laser driver than the Arduino would.

This version of SmoothieBoard (do not hesitate to regularly check their KickStarter page!) Does not have an ethernet port and I could not put my files on the SD card because the controller will be locked inside the machine. So I’m going to have a problem if I want to use “raster mode” for engraving (indeed, it takes a communication speed between the GCODE provider and the control card higher than the speed of execution … complicated by USB!). I do not intend to make engraving with this machine, but to maintain versatility. I will study the possibility to engrave in “vector mode” (everything will be explained on time). This would allow to have a machine that makes cutting while being able to put a small logo, a small inscription or other, without any problem.

I will do my best to remind you how important it is to stay alive (and in one piece) when making and using the machine of this project. The assembly will make you handle tens of thousands of volts and a powerful laser that can cut 12mm plywood (and you will find without too much difficulty that you are more fragile than 12mm plywood).

The machine must be used as safely as possible : impossibility to access the laser when it is on, emergency stop, locking the machine by key, protective panels, cover that absorbs the wavelength of the CO2 laser .

The role of this button is to be able to disconnect the entire electrical network immediately, with a simple pressure (and therefore without going through a computer / controller or other logic board). Once the button is pressed it will be impossible to re-arm the machine without turning it and lifting it. I will add the need to have a key for more security (imagine an emergency stop following a dangerous manipulation, the user restarts and starts again to find a way around … it is better to report the incident to the technician who will take care of the problem before doing a reboot).

This is an undeveloped aspect in the original post and yet it is very important. The CO2 tube will heat and it must be cooled effectively to avoid damage (or worse). Normally it is a separate unit of the cutting machine (probably not to have water near the very high voltage). But in this project, everything is integrated and the exhaust ventilation is recycled to cool the water, which in turn cools the tube.

I wanted to install two security elements on the cooler:

It’s simple: we open it, the laser stops. Immediately, without calculations, without waiting for the control board to give its opinion. A simple switch that opens the circuit to turn off the laser.

So yes, it’s drawn by hand … but I will have lost too much time to find what OpenSource software to use and how to use it (already that the project asks me to learn a lot of things). Not really knowing the specific notation in electronics, I will detail the diagram:

Here are all the documents that allowed me to build the diagram. In case you want to make a different version.

The construction of the diagram allowed me to highlight the lack of fans in the original BOM (I added them to the first post. They will be bigger, more powerful and of course the DXF will be updated accordingly.

The integration of security features has been tricky due to an entry-level laser driver with a rather confusing specification sheet.

Now I can move on the other points. And if you ever have a remark, a question or something, do not hesitate to react in the comments or to contact me by email.

All the articles regarding this series are here : DIY Lasercutter

We use cookies to ensure the best experience on our website. If you continue to use this site, we will assume that you are satisfied with that.OkPrivacy policy